How Pigs are Raised 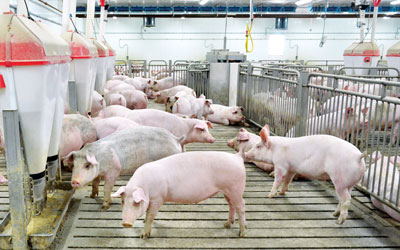 Pig farmers care for their animals 365 days a year, including holidays! Maintaining pig health is a farmer’s pride and passion. Pig stewardship has evolved, but farmers have always assumed the responsibility to properly care for their animals. To learn more about the different needs pigs have at each stage of life, click on the links below:

What do pigs eat?

Where does all the poop go?

THEN: How Pigs Were Raised

Until the 1950s, most farmers produced a little of everything, including a few pigs. Most pigs were kept outdoors, which worked well when there were only a few pigs per farm. Even so, there were problems with weather, pests, predators and disease. Frostbite on hairless ears, sunburn and insect bites were risks. Sows crushed many piglets and productivity was low, providing few pigs for market. It was a tough life for both pigs and farmers.

NOW: How Pigs Are Raised

Today, fewer than 2% of Canadians farm, even though the world’s population has more than doubled! That means modern-day farmers must produce a lot more food to feed everyone. Pig farms have expanded, but animal care has never been compromised; in fact, quite the opposite.

Now that pigs are raised indoors, they benefit from better individualized care and improved health. Barns provide pigs with shelter and a healthy, comfortable environment in which to grow. Farmers protect their animals from disease by following strict herd health procedures, such as showering before entering barns and routinely cleaning pig pens. Today’s pigs are raised with fewer diseases, resulting in healthier pigs and a safer food supply.