Click here to use Alberta Pork's Hog Price Calculator, developed by Alberta Pork with technical support and funding from the Canadian Pork Council.

February 2019: Manitoba Pork has worked with MNP, an accounting and consulting company, to develop different model farms to generate cash flow projections and trial balance sheets, and provide some insight into the economics of the sector. Remember that these are an informed estimate of the cost of production for different systems.

Every producer will have different numbers for their situation. Manitoba Pork encourages producers to create their own comparative numbers and obtain professional advice on how best to interpret the results. Input costs for feed and weanlings are constantly changing, and market prices are determined by a variety of economic forces such as trade tariffs, exchange rates, and changing consumer demand. All producers need to be continually reviewing their financial position and take measures to manage their business risk exposure. It is not unusual to have some producers making profits, while others are losing money for similar operations.

Feed cost is often the first number we circle, as it makes up such a large portion of farrow to finish and grower/finisher costs, but it is sometimes the effect, not the cause. Small changes in sow productivity and barn flow efficiency can have a major impact on profit margins and feed usage. Also of utmost importance is hitting the core of the grid on as many pigs as possible, to maximize the end dollar value.

Most Manitoba hog barns were built for lower productivity and shipping weights. Average carcass weights have increased 7 kgs since 2010. Keep this in mind when considering what the best flow is for your operation. Pigs weaned per sow is a good metric, but if it means crowding in your finishing barn, it may be costing you efficiency and ultimately dollars in the end. The solution may be less sows or looking for ways to expand your finishing barn.

Isowean profitability models are based on the US Cash Market adjusted for freight. This price on an annual basis has been relatively consistent over the last four years. Individual producer contracts may be based off of a different formula price. Sow health and productivity, probably more than cost control, will be the driver of profitability for these types of operations.

Finisher barn cost of production continues to be the most challenged from a profitability model. The model is based off of US cash prices, whereas producers may be able to secure more favourable pricing terms on long term supply contracts. For all in all out-finisher operations, feed efficiency and shipping performance will be two of the most significant drivers of profitability, like the farrow to finish operation.

Manitoba farmers have been raising pigs since the province was first settled. Early statistics show that Manitoba farmers had 17,000 pigs on farm in 1881. Since then that number has grown dramatically to almost three million on farm on July 2016. The sow herd in 2016 is estimated at 319,000 head producing over 8.0 million pigs of which 4.5 million were raised to market weight, and the rest were shipped as weanlings to finishing barns in the United States. Manitoba is the largest pig producing province in Canada, accounting for almost 30% of national production and is the largest exporter of weanlings to the US.

While the number of pig farmers has declined over the years from 14,200 in 1972 to 550 farmers in 2015, the level of production has increased as farms became larger and more productive. There are now about 220 commercial farm operations on over 600 sites. The sector has moved to the three-site model with specialized large sow barns producing young pigs which are weaned at about three weeks of age and placed in nursery barns for six weeks, before being moved to finisher barns to be raised to full market weight in 14-16 weeks.

The following charts illustrate the changes in production over the past 15 years: 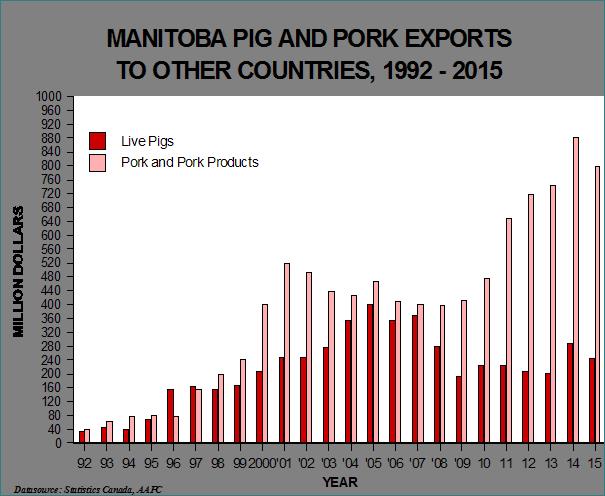 As in all parts of agriculture, the swine sector has consolidated dramatically in the past ten years. Two companies now account for over half of total production, while Hutterite Brethren produce 30%. The balance of production is by independent producers who often collaborate commercially to buy inputs and manage their operations. Hog producers use almost 2 million tonnes of feed ingredients each year, spend over $980 million on operating and capital costs, and create an additional 4500 jobs directly/indirectly in the supply and services sector. Feed costs were almost 60% of all input costs in 2015.

Over 90% of Manitoba’s finished pigs are processed into pork products at two major plants located in Brandon and Neepawa. About 4.5 million pigs from Manitoba, and an additional 750,000 pigs from Saskatchewan for a total of about 5.32 million in 2015, were processed into about 400 million kg of retail pork products. About 65% were exported to markets such as Japan (48%), USA (25%), Mexico (10%), South Korea and China, 30% were shipped to other provinces and the balance sold into the Manitoba market. Manitoba is the most heavily export dependent pork sector in Canada. About 4500 people are employed directly in pork processing while an additional 2600 jobs in the supply and service sector rely on the processing plants. The processing plants could handle an additional 1.0-1.4 million more pigs to achieve the processing efficiency of comparable plants in the USA. Manitoba is the second largest pork processing province after Quebec; total Canadian pork meat production is about 1.9 million tonnes. Canada is a large producer of pork but China is by far the largest with about half of all the pigs in the world on its many farms. 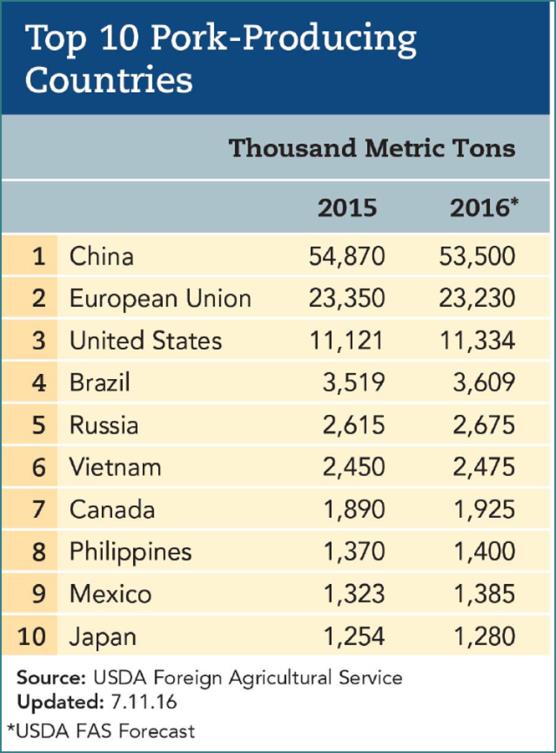 The hog sector is characterized by the huge swings in prices (the hog price cycle): 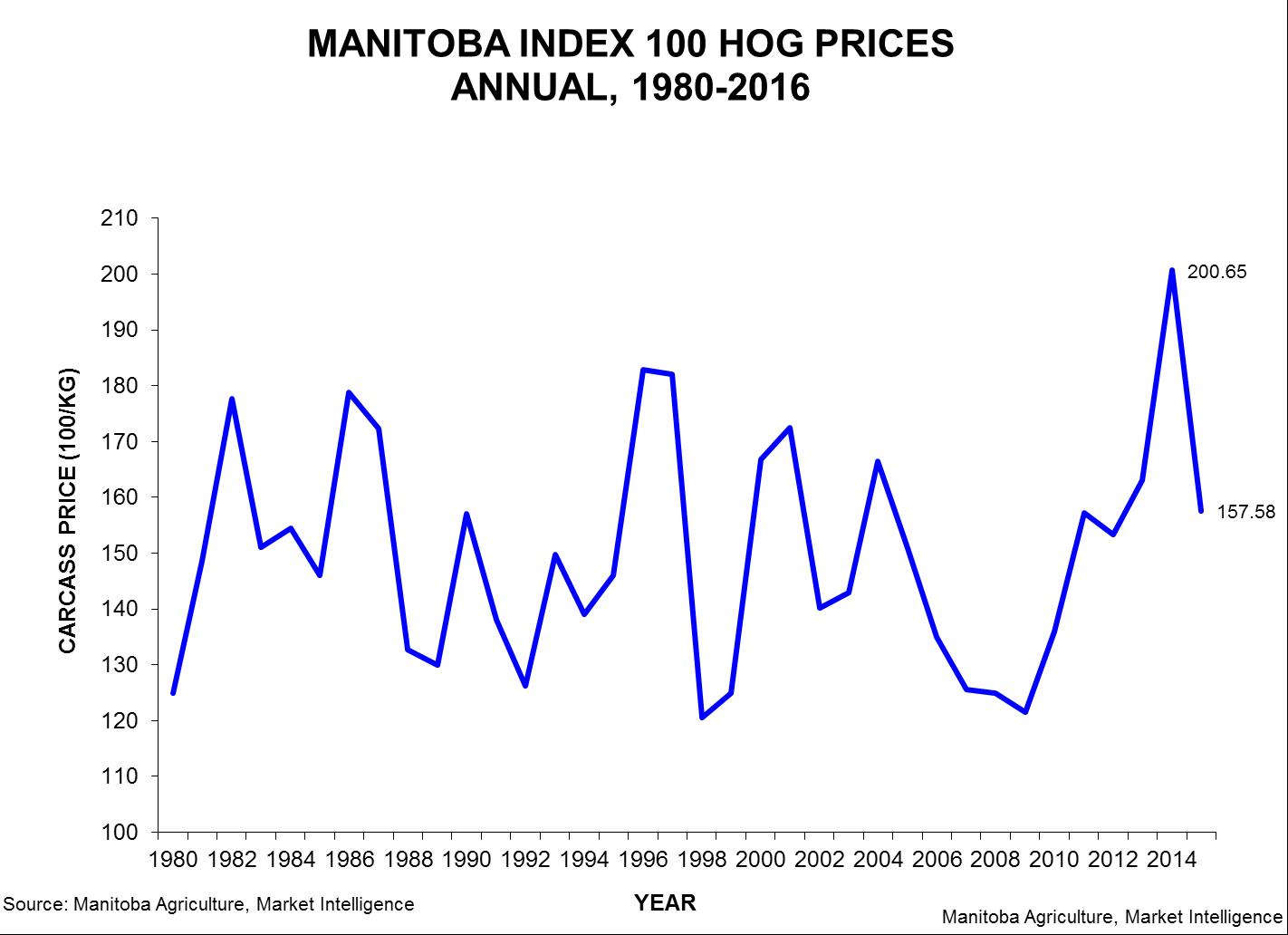 The variability of prices is not only from year to year, but rises and falls seasonally within a year with higher prices generally in the summer months and significantly lower prices in the winter months.

Producers who export weanling pigs to American finisher barns also experience large fluctuations in prices during any year, and over the hog price cycle: 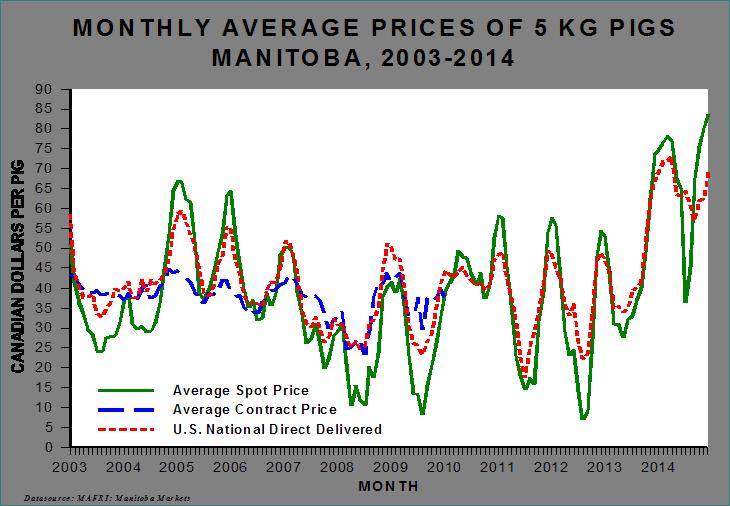 Producers market their pigs directly to processors through contracts of sale, and may have an additional contract for fixing their prices for future delivery. Some producers market through companies, or collectively through h@ms which is a marketing cooperative owned by individual producers. Weanling producers will sell through a broker or directly to individual producers in the U.S., normally on a cash price basis or sometimes on a contractual arrangement.

Compared to other farming enterprises, the capital structure of hog barns can be complicated with producers often being part-owners of different barns which are connected by supply contracts for weanlings and finisher pigs. Operating lines of credit are often larger than other types of farming operations which have most of their capital tied up in land assets. For example, a 2000-place finisher barn would cost about $1 million to build in 2017, producing three “crops” of pigs worth about $1 million in sales, but with input costs of around $950,000. In comparison, an acre of prime farmland in Manitoba would cost about $3000 but produce an annual crop of perhaps $450 in sales.

If Manitoba producers had to replace all their barns in 2016 construction costs, it is estimated that the sector would need over $1.7 billion in capital investment. Cash flow and credit management are key tools for success as much as good stockmanship. Because of the narrowness of profit margins, hog producers focus on margins, incremental costs, and on small, but significant, incremental increases in annual productivity. Manitoba producers have one of the most productive sow herds in North America; it is common for good producers to achieve 28 weaned pigs/sow/year. One saved pig can make a large difference in the profitability of an operation.